Flying the Flag for the Isle of Man

Nicola Pitts and Stacey Meakin, Advocates of Laurence Keenan Advocates & Solicitors in Douglas recently attended a legal conference in Liverpool with more than 60 delegates from firms all over the world, taking with them Dr Ken Milne, Senior Manager for Energy Policy of the Department of Economic Development.

Dr Milne gave presentations to the European Members group, and also to the special interest group for Natural Resources which were each well received.  Dr Milne covered covered CleanTech opportunities in the Isle of Man, and gave a general overview of the Island and its many highlights for those wishing to do business here.

The Conference was hosted by Legalink, an International Network of Law Firms which has its company roots in the Isle of Man. Laurence Keenan Advocates & Solicitors have been a Member of Legalink for some twenty years, during which time there have been a number of referrals of work to and from member firms in relation to matters with a Manx connection.  Such conferences are held twice yearly, and encourage networking and a ready and experienced approach to multi-jurisdictional matters.

Nicola Pitts said “I have worked with a number of the Members from across the globe, from Australia, Chile, Hong Kong and Brussels, so this was a great opportunity to forge and develop these contacts.  The presentations by Dr Ken Milne were very well received by all and over the course of the two days of presentations and practice groups, a number of opportunities to develop business for the Isle of Man were discussed.  We were really able to sell what the Island has to offer as a well regulated offshore jurisdiction, and with delegates from all over the world, we were keen to get our message out to come and do business in the Isle of Man.”

In the past twenty years, many of the Members from across the world have visited the Isle of Man in connection with varying types of cases, from estate administration and personal law matters through to complex money laundering and fraud cases. 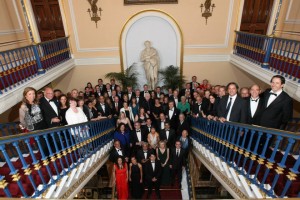 Filed under: News by LKWebAdmin
Comments Off on Flying the Flag for the Isle of Man